A Russian-made charging station FORA in Sochi – Photo by Rostec, 2016

The market of electric vehicles is developing in Russia, as the sales of foreign imported models and Russian-made vehicles benefit from the state support for the increase of charging stations across the country and for reduced customs duties.

In July 2016, 722 electric cars were registered in Russia according to the market study agency « Avtostat »1 which is 75 more than in January.

About 41.3% of electric vehicles in Russia are registered in Moscow and its suburb (298 units).(3)

Over the first nine months of 2016, two-thirds of all electric cars sold in Russia were registered in Moscow and its suburb (38 vehicles). Seven electric vehicles were sold in Primorsky krai, five in St. Petersburg and its suburb, two in Tatarstan and Krasnodar krai. Kirov, Penza, Novosibirsk and Tomsk have each registered a new electric car.(5)

There is no large-scale production of electric vehicles in Russia. The market mainly depends on imports. In 2015, the recession significantly reduced the sales of foreign-made electric cars. The market is recovering in 2016.

Over the first nine months of 2016, 58 electric vehicles have been sold in Russia, that is 19,4% less than in the same period last year.(7)Tesla is the leader of sold electric cars (24 vehicles), including 18 Tesla Model S and 6 new Tesla Model X crossover. The second place belongs to the Mitsubishi i-MiEV (20 vehicles). Japanese Nissan Leaf with 11 sold vehicles takes the third place. There are three more new Renault Twizy electric cars in the Russian market.(8)

The models of electric vehicles available in Russia are registered on the website of the Russian company « Ecomotors » founded in 2007. This company sells electric cars, buses and trucks from several producers such as Mitsubishi, AvtoVaz, Tesla, Nissan, Renault or BMW.(9)

Determined to increase its market shares, the French company Renault started last September the sales of electric Twizy and Kangoo Z.E. for private clients in Russia. Such a move became possible after the decrease of customs duties decided last July and entered into force last September.(10) 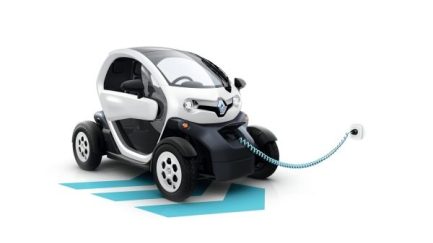 The Russian Avtovaz also believes in the future of this market in Russia. In 2012, the company started a small-scale production of the electric car EL Lada designed on the basis of LADA Kalina. EL Lada weighs 1200 kg and has a maximum speed of 140 km/h. An 8-hour charge from a conventional power outlet is sufficient for a 150 km urban driving.(12) The EL Lada is sold at a price starting at $14 700.(13) 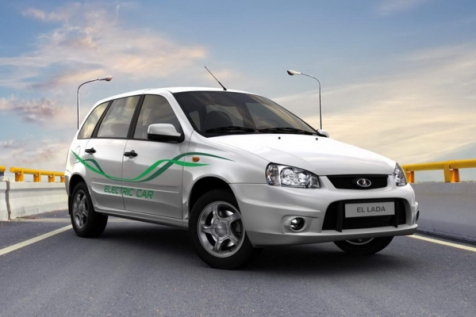 In July, Avtovaz introduced a prototype of the second Russian-made electric car, the Lada Vesta EV.(16) This electric vehicle has a range of 170 km in urban conditions and 150 km in highway/urban conditions, if the air conditioner or heat are kept off. The maximum speed is 140 km/h. The 25 Kw/h lithium-ion batteries can be charged in 9 hours from a domestic power outlet. The Lada Vesta EV weighs 1405 kg.

The state nuclear energy corporation Rosatom could buy from 3,000 to 6,000 Lada Vesta EV and might help to build new charging stations accross the country.(17)

Avtovaz expects to start the sales of Lada Vesta EV in 2017. The car will be more expensive than the EL Lada. However, taking into account the exchange rate difference between the ruble and the euro, the new Lada Vesta EV will cost much cheaper for the European consumer than the other electric cars. The more developed market in Europe with a vast network of charging stations would allow large exports of the latest Russian electric car. (18)

Nevertheless, the competition will be tough, as the German giant Volkswagen recently announced that it is planning to become the global leader in electric vehicles by 2025.(19)

The average nominal salary in Russia in June 2016 was 38 590 rubles or $596.(20) Ordinary Russians cannot easily afford to buy an expensive electric car and to own a garage for charging the vehicle. So far, only wealthy Russians could buy a Tesla S at price starting at 60 000$ in the European countries and then clear Russian customs duties.(21)

Only a free-tax regime on imports within the boundaries of the Eurasian Economic Union had boosted the increase of electric cars from February 1, 2014 to December 31, 2015. When this preferential regime ended last January, the number of imported electric vehicles fell significantly. Only 38 electric cars has been delivered to Russia between January and July 2016 that is 29.6% less than a year ago (54 vehicles) according to the analytic agency AVTOSTAT.(22)

Reduced customs duties will support the demand for electric vehicles, but only slightly said the executive director of the agency Avtostat Sergei Udalov to the daily Vedomosti.(24)

This market in Russia will develop rapidly only when the price of electric cars significantly decreases.

The governement supports the development of the market

The Moscow United Electric Grid Company has been implementing an electric vehicle charging infrastructure development project in the Moscow area since 2011.(25) The MOESK currently operates 28 charging points in the Russian capital.(26) By December, around 20 charging infrastructures for electric vehicles will be built, bringing the total number to 50 charging stations in the Russian capital according to the deputy general director for business process automation Alexander Oreshkin.(27)

One electric vehicle charging station costs around $4000.(28) The charging takes from 2 to 6 hours, depending on the used connector and battery car. According to him, only one vehicle can be charged on each station. MOESK is planning to develop new stations allowing to charge several cars at the same time.

In July, MOESK established at the airport Vnukovo-3 the first eletric vehicle charging station.(29) A special customer card “MOESK-EV” gives access to the station. The owners of electric vehicles can obtain such cards free of charge.

In Kaliningrad, the company Yantaryenergo is planning to build the first charging infrastructure of this city in 2017.(31)

The charging stations are adapted to the Russian climate conditions and cost $4500, that is less than foreign analogues.(33) The first two stations were delivered to Sochi in June.(34) Each station EZS Fora is equipped with european CCS and Japanese CHAdeMO connectors.

The public support to the developement of electric vehicles market in Russia is crucial. In July, the daily Kommersant reported that the draft of a government program for the development of electric transport in Russia till 2025 aims to stimulate production and demand with specific measures.(35)

The draft includes for owners of electric cars reduced tariffs on toll roads, free parking in the cities, the right to circulate on bus lanes and a zero rate vehicle tax. The document also involves a simplification of bureaucratic procedures for the construction of charging stations.(36)

The Chief Operating of the cluster of energy efficient technologies in the Skolkovo Foundation Oleg Pertsovsky said to the Kommersant that the interest for electric vehicle in Russia will grow with reduced prices, increased cruising range, and the development of a broad network of charging infrastructures.(37)

26 Number of the week: How many EV-charging stations are there in Moscow? – Russia Beyond the Headlines, By Yekaterina Murtazina – April 22nd, 2016, https://rbth.com/multimedia/infographics/2016/04/22/number-of-the-week-how-many-ev-charging-stations-are-there-in-moscow_587205 ;