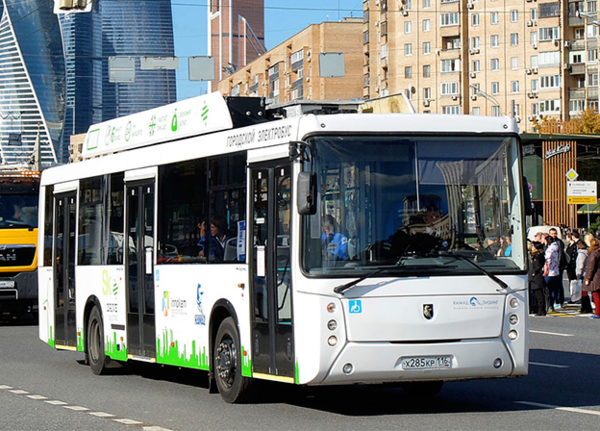 Over two months the electric bus KAMAZ-6282 has successfully run 4200 kilometers in the streets of Saint Petersburg and transported 16,000 passengers during operational tests. The results are promising, informed PAO KAMAZ in a press release.

The electric bus KAMAZ-6282 is a joint project of PAO KAMAZ (registered as a Joint Stock Company in August 1990 and part of the state corporation ROSTEC) and the Russian scientific and technical company Drive Electro (ООО «НИИКЭУ»), founded in 2007.

The operational tests of the new electric bus began in May 2016 in the Russian innovation center Skolkovo, continued on the avenues of Moscow, and today the KAMAZ-6282 runs in the streets of Saint Petersburg.

These tests have shown that the cruising range reaches 76 kilometers on a full charge. Drivers have noticed the ease of the driving system, the quick accelerations and the fast charging speed. Indeed, the KAMAZ-6282 is equipped with lithium-titanate batteries, which are more efficient and faster to charge than other lithium-ion ones, thanks to lithium-titanate nanocrystals.

The vehicle can charge its batteries even under the low temperatures of the Russian winter, in 6 to 20 minutes through external charging stations installed on the route. The electric bus KAMAZ 62-82 has demonstrated itself quite reliable, even during a snow storm.

The batteries are designed for at least 10 thousand full charge / discharge cycles, and from 10 to 15 years of intensive use.

Moreover, these lithium-titanate batteries have a relatively low weight, allowing the electric KAMAZ 62-82 to transport 85 passengers with 25 seats, for a total weight of 19 tons.

Passengers have also appreciated the quiet and smooth ride. Furthermore, the electric bus is adapted for physically disabled passengers, has a low floor and is equipped with video cameras and satellite navigation.

The main benefit of this kind of transport is that it does not produce greenhouse gas, air pollution and noise.

A small cruising range and a high price

Critics will notice the main shortcomings that are the small cruising range of 76 kilometers on a full charge and the high price of the equipment. It is true that this is high cost that mainly hinders today the development of environmentally friendly transport in Russia.

The French electric buses “BlueBus” launched in Paris in May 2016 costs €500 000 the unity for a cruising range of 180 kilometers and a capacity of about 100 passengers.

The CEO of the Group producing these electric buses, Vincent Bolloré, told journalists that he is convinced that within 7 years, the price of these electric buses would drop to €250,000 thanks to reduced operating costs and engineering works compared to diesel buses.

The Catalyst E2 Series, an electric bus made by Proterra, a leading North American manufacturer, even costs $799,000. This US-made bus has a cruising range of up to 560 kilometers (350 miles) on city streets.

Therefore, as long as the price of electric batteries will remain high, achieving a positive economic effect would be only possible with subsidies from the federal budget say representatives of the Russian public company “Passazhiravtotrans”. Nevertheless, the cost of electric batteries is progressively decreasing over the years, making more affordable this kind of public transport.

Furthermore, operating costs of an electric bus are lower than those of a diesel bus, due to lower energy costs in comparison with diesel fuel and due to reduced volume of engineering works on the electric bus service, explained the public transport company “Passazhiravtotrans”. Therefore the price of the electric bus KAMAZ-6282 pays off in the middle of its life cycle say representatives of PAO KAMAZ.

Moreover, the Russian federal State could support an electric public transport program since the year 2017 has been declared the Year of the Ecology in Russia and the environmental issue has become a priority in the recent Strategy for scientific and technological development of the country.

Russian President Vladimir Putin even attended on December 27, 2016 a meeting of the State Council dedicated to the environmentally sustainable development of Russia.

According to the chief designer in automobile construction and special equipment of PAO “KAMAZ” Andrey Savinkov, many transport companies of various regions of the Russian Federation are ready to test electric buses.[1]

“The electric bus KAMAZ 62-82 is a safe and environmentally friendly transport, complying with modern international standards and able to smoothly carry out passengers on any route in any weather conditions.”

Official launch of the final stage of tests of the electric bus KAMAZ-6282, Skolkovo Innovation Center. Photo credits : Rostec, May 2016.

Sergei Ivanov, Doctor of Technical Sciences, founder and General Director of the Russian company Drive Electro, said that the next phase would be to install on the electric bus route ultrafast charging stations that can charge the lithium-titanate batteries in just 6 minutes. The first station would be installed in the “Skolkovo” Innovation Center near Moscow this month.

Sergei Ivanov added :“If a city has a tram or a trolleybus system, then all the most expensive part of the infrastructure is already there. Unfortunately, in the last 25 years, many municipalities in Russia have reduced electric infrastructures in urban transport systems. However, the most valuable, power generating substations generally have remained intact. These substations are particularly needed for electric buses”.[2]

The electric bus could become an alternative to trolleybus in new areas:

“If you pull back the power contact network and build the power substation, it will cost about $ 1 million per kilometer. Therefore, electric buses are a cheaper option than installing trolleybus lines.”

What to think about electric transport ?

At first sight, electric transport technology is expensive. The purchase of an electric bus costs twice than the one of a diesel bus. Nevertheless, air pollution in cities generates heavy financial losses. Electric transport is an issue not only related to climate change but also to the health of citizens. Respiratory diseases and premature deaths caused by air pollution generate billions of dollars of losses for our societies and economies.

While the effects of electric transports on the environment will be felt in decades, those relating to health will be immediate.

Read also : Air Pollution Kills 6.5 Million People Every Year, And It Could Get Worse Unless We Act Now.

The first objective would be to replace buses running on diesel fuel by electric buses. It is a cheaper and healthier solution to open new electric bus routes with large autonomous cruising ranges. Electric public transport would allow reducing greenhouse gas emissions, air pollution and urban noise. Moreover, such a move could boost the market of electric private vehicles.

A sustainable and successful economic and social development cannot ignore the electric transports.

However, producing the electric batteries demands a high amount of energy and the use of lithium. The extraction of lithium is not without environmental and social consequences.

Improving the quality of life in Russian cities

Since 2000, practically no perceptible reduction of air pollution in Russian industrial cities has been noticed. The Russian government has concluded that it was necessary to develop new policies concerning public transport and traffic flows in cities and elaborate new tools of measuring the quality of the air.

Municipalities and regional authorities are competent on these issues. They must identify their instruments of influence and how they can develop and implement policies of environmentally friendly public transport and modern urban solutions.

As switching to electric traction for vehicles can be one of the main ways to improve the quality of life in Russian cities, the PAO KAMAZ in partnership with Drive Electro announced in a press release that it was ready to respond to any worthy proposal.

Like Moscow, Saint Petersburg tests electric buses made by Russian and Belarusian producers. The Russian public transport company Passazhiravtotrans and the Belarusian manufacturer Belkommunmash agreed on this issue in October 2016.

These programs are part of the modernization of the urban transport networks in order to increase quality of life in Russian cities and to prepare the 2018 FIFA World Cup.

Moreover, negotiations would be underway with the Czech company Śkoda.

According to its spokesperson Tatiana Klepikova, the public transport company Passazhiravtotrans intends to test as much as possible different electric buses from Russian or foreign production, to choose the most convenient and economical way to Saint Petersburg.

In the first quarter of 2017 an articulated electric bus with a capacity of 170 passengers will start trials in Saint Petersburg.

The new operational test will allow to compare the performances of the different models of electric vehicles.

The transport committee of Saint Petersburg would decide in the following months about the development of electric bus routes in the imperial capital founded by Peter the Great in 1703.

Saint Petersburg is Russia’s second-largest city after Moscow, with five million inhabitants in October 2010 according to the Russian Federal Service of State Statistics.

PAO KAMAZ is a Russian automobile and bus producer founded in 1969 and registered as a Joint-Stock Company on August 28, 1990. It is the first company to test electric public transport in Saint Petersburg.

Drive Electro is the first Russian company to focus on the development and implementation of innovative electric transport. After presenting and certifying in 2011 the first electric bus in Russia, Drive Electro has become one of the leaders of engineering services in the field of commercial electric vehicles and innovative public transport. Today this company introduces all new technological developments and expands the scope of using lithium-ion batteries in transport.