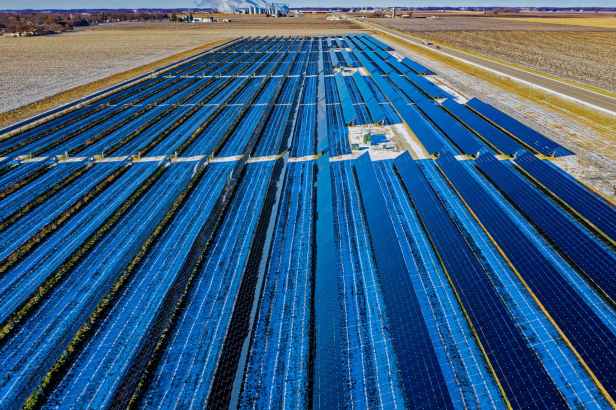 The European Bank for Reconstruction and Development (EBRD) and the Black Sea Trade and Development Bank (BSTDB) will provide each a EUR 18 million loan for the construction of three solar power plants in the Nikolaev oblast in southern Ukraine, reported a press release. The solar farms will be built by the company Rengy Solar B.V.

Their total installed capacity will be 47 MW.

Registered in the Netherlands, Rengy Solar B.V. belongs to the Norwegian developer of solar energy projects Scatec Solar and Rengy Development, a company founded in 2009 and engaged in renewable energy in Ukraine, Kazakhstan and Armenia.

“Both companies have experience in implementing similar projects with the EBRD, but this new project marks the entry of Scatec Solar into the Ukrainian market of renewable energy”, mentioned the press release.

Last July the Norwegian Scatec Solar signed an agreement with Rengy Development about joint implementation of 47 MW of solar power in the Nikolayev oblast. The global cost of the three solar farms is EUR 52 million. The main part of this investment will be covered by the two loans of EBRD and BSTDB amounting to EUR 36 million.

According to information released in July, Scatec Solar controls 51% of the project, while Rengy Development owns the remaining 49%.

The managing partner of Rengy Development Narek Harutyunyan is also one of the founders of Trust Capital Group.

The three solar power projects in the Nikolayev oblast will be the first under the EBRD’s recently approved Ukraine Sustainable Energy Lending Facility III (USELF III) framework. The USELF III program, worth EUR 250 million, follows two previous sustainable-energy lending programs co-financed by the EBRD and the Clean Technology Fund, which together already funded 13 renewable energy projects in Ukraine with a total installed capacity of 151 MW.

Read also : A Norwegian company to build 83 MW of solar power in Ukraine by 2019

Last September, Interfax press agency reported that the EBRD was investing $ 2-4 million in the development of a new support system for promoting green energy in Ukraine, such as auctions which will be used to attract investors.

The senior banker of the electricity department of the EBRD, Olga Eremina, announced in November that the bank would consider the new financing program (after USELF-ІІІ) for renewable energy only after the introduction of an auction system in Ukraine, which would reduce the current green tariffs for renewable energy.

The deputy director of the EBRD in Ukraine, Marina Petrov, said in September that when Ukraine moves to auctions for stimulating renewable energy, the bank is ready to share the experience of holding such auctions in other countries such as Turkey, Poland, Bulgaria, Jordan, Egypt and Armenia. She called for the adoption of the law on green auctions before January 2019.

Marina Petrov also noted that there is a great potential in Ukraine for the development of other renewable energy sources – primarily bioenergy, as well as small hydropower.

The EBRD is the largest international investor in Ukraine. Since the beginning of its activities in the country in 1993, the bank has provided almost EUR 12.1 billion to fund about 400 projects. The development of renewable energy in Ukraine has been supported by the bank under USELF programs since 2009. The bank has so far funded renewable energy projects in Ukraine with a total capacity of over 150 MW for a global investment of more than EUR 100 million. The current USELF-III program, which replaced the previous one, was approved by the bank in July 2018.

Read also : US and Lithuanian investors to build 192 MW of wind power in Ukraine

The Black Sea Trade and Development Bank (BSTDB) was established in 1998 by Albania, Armenia, Azerbaijan, Bulgaria, Georgia, Greece, Moldova, Romania, Russia, Turkey and Ukraine to promote the economic development of member countries and regional cooperation. The authorized capital of the bank is EUR 3.45 billion. The headquarters of the BSTDB is located in Thessaloniki (Greece). The total portfolio of the bank in the Black Sea region includes 365 approved projects worth EUR 5 billion in key sectors such as infrastructure, energy, transport, manufacturing, telecommunications, finance and other areas.

The wind power projects of DTEK take place as the Ukrainian government set in October 2014 the goal to increase renewable energy share in the national power mix to 11% by 2020 and 25% by 2035. The country is indeed committed to reduce its carbon emissions and fight climate change. Ukraine signed the Paris Climate Agreement in April 2016 and the national Parliament ratified the text in July 2016.

In December 2018, Mikhail Bliznyuk, the Deputy Minister of Energy of Ukraine remembered that in accordance with the Energy Strategy of Ukraine until 2035, adopted in 2017 the country must reach a renewable energy share of 11% by 2020 and 25% by 2035. This share is less than 2% as of June 2018, announced Ostap Semerak, Minister of Ecology of Ukraine since April 2016.

In 2018 renewable energy capacities of Ukraine grew by 23%, reported the Deputy Minister of Energy Mikhail Bliznyuk.

==> 70 pages of valuable information and in-depth analysis of the Ukrainian wind power market, answering the questions that ask investors and energy companies.

==> If you pre-order before the official release of the report, you will benefit from a 15% discount on the total amount.

The report is written in English and delivered up to 24 hours by e-mail after the payment.

If you have any question, do not hesitate to send an email at contact@eurasianetwork.eu

You can contact us for advice and business intelligence services on your energy project in Ukraine, Russia or Kazakhstan.