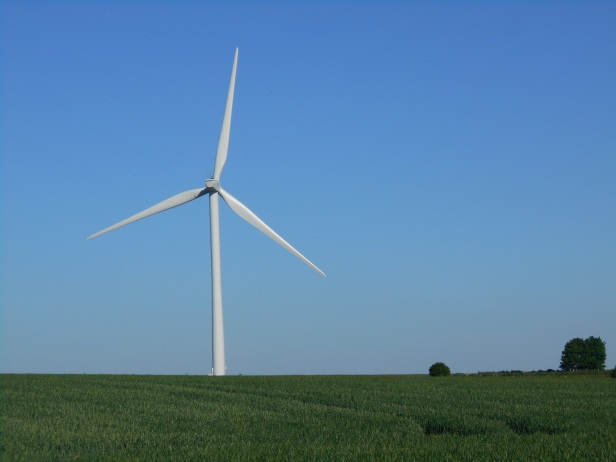 The Ukrainian energy company DTEK and the Danish Vestas signed an agreement for the construction of a 100 MW wind farm on the Azov sea coast, in Eastern Ukraine. Construction will start in January 2019.

DTEK Renewables (a subsidiary of the Ukrainian DTEK, managing its renewable energy assets) and Vestas, the Danish manufacturer of wind turbines, have signed a contract for the construction of the “Orlovskaya” wind farm, with a capacity of 100 MW, reported a corporate press release. The wind power plant must generate every year about 380 million kWh of “green” electricity, covering the energy needs of 200,000 households.

Investments will exceed EUR 135 million euros. The 100 MW wind power plant will be located on the Azov sea coast in the Zaporizhia oblast. It will be made of 26 wind turbines manufactured by the Danish Vestas, with a capacity of 3.8 MW each. This model of wind turbine has already been used in previous projects in Ukraine. Now the preparatory works are being completed. The construction will begin in January and will last until the end of 2019.

Read also : US and Lithuanian investors to build 192 MW of wind power in Ukraine

Power generation from this 100 MW wind farm will help to reduce CO2 emissions by 400 thousand tons per year. Besides, the construction of the wind farm will create several hundred temporary jobs and its operation will generate dozens of permanent jobs in the region.

This is the third project of DTEK Renewables in the wind power sector to be launched in 2018. Thanks to the implementation of all its projects, the Ukrainian energy giant DTEK will see its wind generation capacity to reach 510 MW by the end of 2019.

“The partnership with Vestas is a landmark for DTEK. The first project of the company in renewable energy – the Botievskaya wind farm, which today generates more than 60% of all electricity from wind power in Ukraine, was carried out with Vestas. This 200 MW wind farm is a benchmark for the design and construction of other wind power plants in the country and the efficiency indicators exceed the world average. We are confident that the Orlovskaya wind farm, to be built in partnership with Vestas, will work efficiently as well” said Maksim Timchenko, General Director of DTEK since 2005.

Read also : A 200 MW wind farm to be built in Southern Ukraine

This year DTEK launched the construction of 500 MW of new solar and wind power capacities across Ukraine. Over the past two years the company attracted investments amounting to near 700 million euros, revealed Maksim Timchenko. In 2019, DTEK plans to increase its renewable energy portfolio to 1,000 MW.

“This is the DTEK’s contribution to the implementation of Ukraine’s energy and environmental goals, as well as to the innovative transformation of the country’s energy system”, concluded the General Director.

A leader of the Ukrainian energy market

Founded in 2005, DTEK is the largest private energy company in Ukraine, employing 73 thousands people. It is part of the financial and industrial group System Capital Management (SCM, Donetsk), controlled by the oligarch Rinat Akhmetov.

DTEK produces coal and natural gas, generates electricity at thermal and renewable energy facilities, supplies heat and power to end users and provides energy maintenance services through its subsidiaries DTEK Energo and DTEK Renewables. Direct management of producing companies is carried out by operating structures. DTEK plans to control 25% of the Ukrainian energy market by 2020.

The corporation exports electricity in Hungary, Romania, Slovakia and Belarus. In 2008 the subsidiary “Wind Power LLC” (ООО Винд Пауэр) was created to implement wind energy projects. The construction of the Botievskaya 200 MW wind power plant was launched in 2012 and achieved in 2014, allowing to reduce CO2 emissions by 600 thousand tons per year.

DTEK is also engaged in solar energy and completed its first 10 MW solar farm in 2017, which now reduces CO2 emissions by 12 thousand tons per year. In addition, the corporation is building a 200 MW solar power plant in the Dnipropetrovsk oblast, which must provide electricity to 100,000 houses and companies thanks to its 750 thousand solar panels and 80 inverter stations. China Machinery Engineering Corporation (CMEC) takes part in this ambitious project, which needed a total investment worth USD 230 million. The construction must be completed by early 2019.

Read also : A Norwegian company to build 83 MW of solar power in Ukraine by 2019

DTEK Energo, managing the energy assets of DTEK, registered a turnover in 2017 worth UAH 141,738 million (USD 5.095 billion) and net loss amounting to UAH 2,916 million (USD 104.836 million). The company’s financial results are affected by the loss of assets in the Donetsk and Lugansk regions. From January to June 2018, DTEK Energo registered a revenue worth UAH 83,181 million (USD 2.990 billion), according to the corporate financial information.

The Danish company Vestas, founded in 1898, is one of the world’s largest wind turbine manufacturers. The 23,900 employees of Vestas design, manufacture, install, and service wind turbines across the globe, with 92 GW of wind turbines capacity in 79 countries.

DTEK carries out wind power projects as the Ukrainian government set in October 2014 the goal to increase renewable energy share in the national power mix to 11% by 2020. The country is indeed committed to reduce its carbon emissions and fight climate change. Ukraine signed the Paris Climate Agreement in April 2016 and the national Parliament ratified the text in July 2016.

In December 2018, Mikhail Bliznyuk, the Deputy Minister of Energy of Ukraine, remembered that in accordance with the Energy Strategy of Ukraine until 2035, adopted in 2017, the country must reach a renewable energy share of 11% by 2020 and 25% by 2035. This share is less than 2% as of June 2018, announced Ostap Semerak, Minister of Ecology of Ukraine since April 2016.

Renewable energy capacities grew by 23% over 2018, reported the Deputy Minister of Energy.

About 230 companies are now engaged in the renewable energy industry in Ukraine. Most manufacturers operate in the solar power sector with small capacity stations. The exceptions are the Chinese CNBM, the Austrian Activ Solar and the Ukrainian DTEK Renewables.

==> 70 pages of valuable information and in-depth analysis of the Ukrainian wind power market, answering the questions that ask investors and energy companies.

==> If you pre-order before the official release of the report, you will have a 15% discount on the total amount.

The report is written in English language.

Delivery: Up to 24 hours by e-mail after the payment.

If you have any question, send an email at contact@eurasianetwork.eu

You can contact us for advice and business intelligence services on your energy project in Ukraine, Russia or Kazakhstan.